Known as one of Toronto’s most dynamic neighbourhoods, Yorkville is now synonymous with luxury condominiums, elegant boutiques, haute couture fashion, fine dining and an endless parade of high-end exotic cars purring through the narrow streets. Now sprawling with four-star hotels, commercial office towers and designer boutiques, it was once considered home of Toronto’s original indie music scene and alternative counterculture lifestyle with its bohemian clubs, counterculture ideals and coffee houses, which doubled as music venues.

Yorkville’s history is a fascinating one that has radically shifted in its aesthetic and ideologies unlike any other neighbourhood in Toronto. Named after brewery entrepreneur Joseph Bloor in 1830, Yorkville was a working class residential neighbourhood of Victorian-style homes, brick manufacturing, beer breweries and picturesque gardens before flourishing as the ‘Canadian Capital’ of the hippie movement in the 1960’s. Yorkville nurtured Toronto’s first cafe culture with many vibrant European-style cafes with large patios at a time when coffee drinkers preferred to enjoy their lattes indoors. Literary and musical talents flourished including the likes of Joni Mitchell, Neil Young and Gordon Lightfoot who cut their teeth at coffee shop music venues such as the Penny Farthing or the Riverboat. The thriving music scene drew huge crowds, closely followed by a culture of drugs, sex and motorcycle gangs, which prompted a “love-in” in 1967 to support a vehicle-free pedestrian zone at Yorkville in the evenings. The 1970’s was a decade of drastic changes as developers began purchasing rundown Yorkville property and converting old homes into upscale boutiques including the Hazleton Lanes and York Square shopping centres. This paved the way for the transformation into high-end retail brands such as Harry Rosen and Holt Renfrew in the 1970’s and into the 1980’s. Soon after, the famous coffee houses gave way to commercial office spaces, luxury condos and first class art galleries paving way to a thriving commercial area that Yorkville is known for today.

Best things to do in Yorkville for luxury condo residents 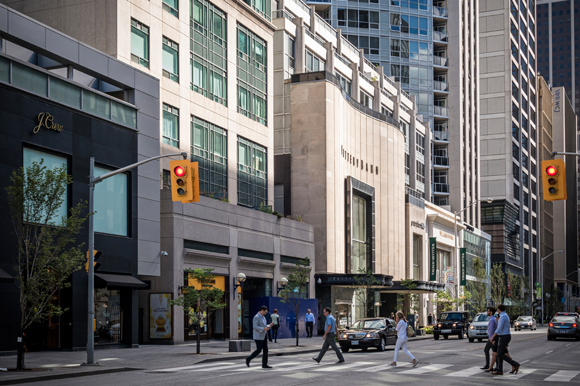 Yorkville’s transformation from it’s shabby-hippie beginnings came full circle with the installation of it’s award-winning “Village of Yorkville Park” in 1993 with it’s landscape of tress, bench, waterfall designed to reflect the Canadian landscape. The following are just a few of the reasons why it’s a popular hotspot in Toronto for city dwellers, luxury condo residents, urban families and tourists alike.

Yorkville is a mecca for shopaholics with a wide range of luxury high-end brands to small wallet-friendly retail stores. From the 60+ boutiques at Hazleton Lanes, grocery havens like Pusateri’s and Whole Foods, discounted luxury goods at Winners and one-stop-shop everything fabulous at Holt Renfrew, there’s something for everyone. A visit to Holt Renfrew’s also offers many other services including a spa and salon, complimentary alterations, concierge valet parking and personal shopping services.

Warmed up after a taking a walk in the revitalized Robertson Davies Park? Check out the award-winning “ Village of Yorkville Park ” in Yorkville along Cumberland Street, which features a massive 650-ton rock from the Canadian Shield estimated to being over one billion years old. The park’s anchor is a hot spot among tourists, families and four-legged friends and is the perfect background for a summer selfie-stick moment.

Looking for a quick bite or a fine-dining experience to celebrate a special occasion? Yorkville offers a wide selection of chic restaurants from a 50’s style diner for breakfast at Flo’s Diner, delicious escargot appetizers at Sassafraz , authentic Italian far at Trattoria Nervosa or drinks at the infamous panoramic rooftop patio at Park Hyatt hotel. It’s not hard to see why Yorkville restaurants are a popular hotspot during the popular culinary Summerlicious and Winterlicious events.

Looking for some cultural inspiration beyond the latest exhibit at the Royal Ontario Museum nearby. Stroll through Yorkville’s nearly 40 art galleries in search of the perfect artwork to adorn your exquisite condo suite at The Davies. Be sure to include Mayberry Fine Art, WORKshop Toronto and Liss Gallery in your journey to see their collections of historical, international and Canadian artworks.

Toronto is fondly known as ‘Hollywood North” in film circles as a popular filming destination and production centre, so celebrity spotting is a regular occurrence in Yorkville. Every September, Toronto turns into a star haven during the Toronto International Film Festival with A-list celebs and A-list parties. You can expect most celebrities to book their visits at Yorkville’s swankiest hotels include the Four Seasons, the Hazleton Hotel, the Intercontinental Hotel and the Park Hyatt.

Luxury living near Yorkville is the symbolic standard for the ever-changing pulse of Toronto and hailed as the “Mink Mile” of the city. If you’re in the market for a new condominium near Yorkville, Toronto, contact The Davies sales office at 416 873-0862 to see why The Davies should be at the top of your list.

Living at the Davies would be a pleasure to anyone who has a passion for art. Situated in the Downtown Grange Park district is the Art Gallery of Ontario (AGO) that sits on a 480,000 sq. ft. area of physical space. It one of the largest and critically acclaimed Galleries in North America and one definitely worth checking out!

The AGO was built in 1900, and was then later redesigned in 2008 by Toronto’s prominent architect Frank Gehry. Its collection includes more than 80,000 works spanning the first century to the present day. The gallery has an open, airy and easy to roam layout, with a spiral staircase.